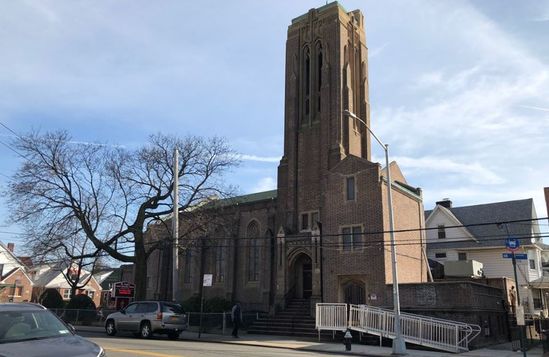 Our records show that St. Paul’s roots traces back to Williamsburg, Brooklyn, where on September  23, 1846  the ministry began as a German Methodist Church of Lorimer Street under the leadership of Brother C. Kiel of the First German Church in Manhattan.  In September 1896 the congregation moved to a larger building at the corner of Marcy Avenue and Penn Street where they worshiped for thirty years. The church was also renamed St. Paul’s Methodist Episcopal Church.
About the same time that the Lorimer Street German Church relocated to Marcy Avenue, the Germanic Real Estate and Improvement Corporation in Flatbush donated a plot of land at the corner of Avenue D and East 38th Street to the German community for a Church building only.  The Minister was Rev. George Simmons; and he immediately moved to Vanderveer Park to organize a congregation. On Christmas Day 1894, the cornerstone was laid for the Salem German Methodist Church of Vanderveer Park with entrance on East 38th Street.  This building now serves as a multipurpose building and is affectionately known as the ‘Chapel’.
The Parlor building or parsonage was built in 1910 and was used for After School and Summer Day Camp Center.  It also serves as the Venue for Men’s Bible Study and Prayer Group as well as committee meetings .
In 1926, the congregation merged and worshiped together as the St Paul’s Methodist Episcopal Church of Vanderveer Park with Rev. J.H. F. Bose as their Pastor. In the Fall of 1928, the cornerstone was laid for the building in which we now worship.  It was completed and dedicated in May of 1929.  A property was purchased at 3723 Clarendon Road in 1952 for the Parsonage. (A home where the Current Pastor Resides)
The year 1965 started a transformation of St. Paul’s. In that year there was a merger of United Brethren and Methodist Episcopal Churches, hence the birth of St Paul’s United Methodist Church of Vanderveer Park.  Gradually the demography of the community began to experience drastic population shift with the influx of Caribbean immigrants. Today the congregation is a reflection of the community which also is demonstrated in the worship experience. In February of 2002, a Building Fund was launched to raise funds for a multipurpose Community building on the site where the Chapel now stands.  In the fall of that year, we refurbished and dedicated the Pipe Organ of the Church.
The year 2003 brought a wind of change to St. Paul’s in many ways. First, we celebrated the installation of chimes in the new bell tower with its soothing programmed hymns.
In 2004, we installed a new parquet floor and new windows with contributions from the church families in the Auditorium. God has blessed us to do the following things in the past few years:  1) the installation of the Booth for media support of audio and visual to enhance the service.  2) Installation of the ramp and lift to facilitate the physically challenged.   3)  The Trustee Board has facilitated the installation of new gas boilers to replace the previous oil burners.
In the year 2011 - 2013, the Chapel and Parlor Building (Day Care) underwent a complete renovation which included new bathroom and kitchen.  The Parlor is currently used as a Summer Camp Administration Office, as well as hosting committee meetings.  The Chapel provides adequate space for our growing After-school, our Wesley Adult Group meetings and for Choir rehearsals. Other significant repairs were undertaken by the Trustee for the general upkeep of the church building.
The church welcomed our Youth minister; Rev. George Haighler III, Assistant to the Pastor, who served until February 2014.  In addition to the purchase of a new stove in 2015 for our main kitchen to assist in preparation of meals to help our community in several annual events.
St Paul's embraced our New Pastoral family in 2016, Rev Roger Jackson and his wife Kim.  In February of 2017, a new vision of being 'Christ-Like' was established and has been ingrained in our everyday activities as Children of Christ body, the Church. The Lord Jesus Christ has taken us through many stages of growth and development, and we as a small congregation continue to open our doors to this local community in Brooklyn.

God has been good to us these 175 years and we will continue to actively display that Christ is alive in us.

*Who We Are
*a small Christian Congregation in the East Flatbush section of Brooklyn.
*We operate as a Muti-National Church with a large Caribbean population of worshipers.
*members of THE NEW YORK ANNUAL CONFERENCE (NYAC) of UNited Methodist Church
Member of LIWD ( Long Island West District)​
*we are a Connectional Church, connected through our doctrine, our polity and practice ( our Faith).
​ See more: "http://www.umc.org/who-we-are/history">